A few weeks back, I was reading a book called Teaching Minds (Kindle/Hardcover/Paperback or Audible Audiobook) by Roger Schank and really enjoyed it. As a Professor Emeritus at Northwestern University after his faculty experience at Stanford and then Yale, he is known for the quote:

There are only two things wrong with the education system –

When I read great books on education, learning, or motivation, I will tweet out quotes that I may want to go back to at a later date. Today, during my grade 9 applied math lesson, I was immediately brought back to the following quote from Teaching Minds:

“Once you move to teaching large groups of 10 or more students, you must teach by talking and hope someone was listening.” ~ Teaching Minds

It was this book that inspired me to completely break free from note templates that I had been making for my students to complete on their iPad. I consider them pretty nifty and are more interactive than what you’d think of when someone says “worksheet“, but I realized that much of it was me scaffolding them along and that can quickly turn to disengagement and even just “copying” once it goes up on the screen.

Students Learn By Doing – Not Listening

Today, my students were working on Dan Meyer’s Hot Coffee 3 Act Math Task to introduce the volume of a cylinder with my goal being that we show the interconnectivity of math by connecting this new knowledge to prior knowledge involving proportional reasoning. What I’ve taken away from Teaching Minds and other books like Make It Stick that discuss interleaving with spaced practice is that students learn by doing – not by listening. While this might be difficult to deconstruct in certain subjects that are content heavy like Geography or History, it seems fairly obvious in math class. Although, take Geography for example, many students find that colorful visuals and objects really help them to learn. Take the countries as one example, a student might find it hard to be tested on these things unless they have physically touched a flag of chad or seen a flag of the US to remember as they take the exam. History is similar in the sense that a lot of students remember historical facts if they have been to a relative museum or visited a historic location. As I’ve outlined in a recent post called The Two Groups of Math Students I Created In My Classroom, I spent the better part of my career rewarding students who could memorize through mass practice, rather than rewarding them for being good at math.

But I Had Successful Students Who Learned By Listening…

It can be difficult to convince math teachers that scrapping a formal note that outlines definitions, formulas and an extensive list of examples if I expect them to “get through the curriculum”. After all, many students are successful when lessons are delivered primarily in a lecture format where a note is given and students sit back passively listening to the teacher while copying down the important points. But how many of us have actually engaged in some serious thinking about what made those students successful? Was it because they copied a note and listened to you? Unlikely. For example, although students can be successful from learning this way, many students would much prefer a more visual and exciting lesson. Taking geography as an example again, if you are looking at maps, using an online map maker could be a more interesting way to do this, if the students were to create these themselves. It’s about taking traditional (and successful) ways of teaching and making them a little bit more exciting for the learner.

I’ve learned to be pretty honest with myself when it comes to reflecting on my lessons. When my lesson sucks, I know it and am not ashamed to say it. Thinking back to my days delivering a traditional note as mentioned in the previous paragraph, my successful students were those who did their homework and crammed the night before a test. Those who were not successful, likely did neither. Sure, firing off a couple examples would help some make connections, but how did they do when it came to problem solving questions that appeared to be unfamiliar? Not so great.

Listening Is Hard For Everyone

Listening is tough. It is even tougher when you don’t care about what you’re listening to. When strong students seem engaged in your lesson, it is more likely the need to get the note down and maintain a high average that is motivating them rather than the words coming out of your mouth. For struggling students, they learned long ago that school isn’t so bad when you aren’t paying attention. Many would say that today’s generation has a lot more Attention Deficit Disorder (ADD), while I believe they just aren’t afraid of teachers or parents anymore and don’t feel a need to comply. That isn’t a bad thing, either.

I have ensured that each and every class this semester has focused on students solving problems through discovery/inquiry, connecting them to new learning goals, and finding ways to extend them to a variety of other concepts in the course. There is not a whole lot of direct instruction coming from me and the kids are doing great. Now that I’m not up there for 75 minutes talking while oblivious to who is or is not paying attention, I can tell quickly when students are not listening. Only once or twice a class do I ask them for 50 seconds of their time (even though it is for more like 5 minutes) and during that time, I tell students to stop and have their eyes on me. Wow, do they struggle with it. I typically have to individually ask certain students for “eyes up” and by then, the ones who were looking are now looking through me and a few others are now starting to lose focus.

Today, I wanted to clarify an issue that every student in the classroom was having. The question was an extension that Dan Meyer provided with the task:

If you were going to try to triple the Gourmet Gift Basket worlds largest coffee record, what kind of coffee cup would you have to build? 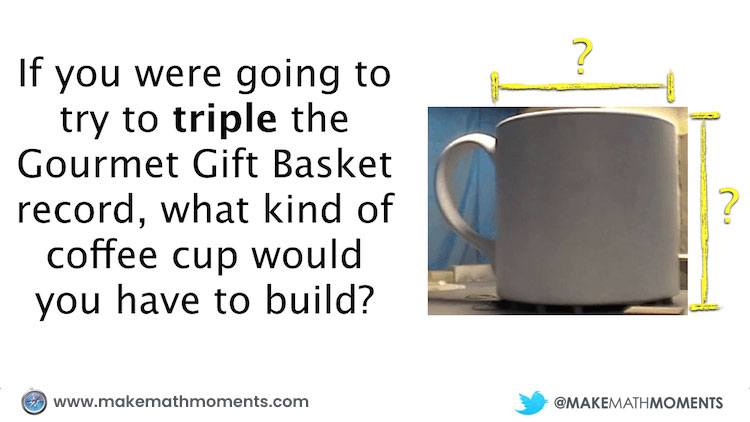 Since the students had to convert the volume of 269.255 cubic-feet to approximately 2010 gallons, every student had substituted 2010 in for V in the volume of a cylinder formula. Usually, I talk with a small group of students who are working collaboratively, however I thought I could save some time and address the whole class.

After circulating the room, it appears that we are all having a similar issue. Can you all stop for 50 seconds and look this way…

I went on to ask students what had gone wrong and when there was nothing, I thought this is a great spot for some direct instruction. I explained why using gallons was not possible and that they should use their measurement in cubic-feet and sent them on their way.

I then began walking around again to each group and quickly realized that none of the students had made the adjustment. So, I discussed it with the first group and they were off. Went to the next group and explained it again. The third… and so on. It actually took a matter of 10-15 seconds talking with groups individually and they were off to the races.

Talking To A Large Group Hurts More Than Helps

What I realized rather quickly today was that speaking to a large group appears to be the most efficient method, but it actually hurts more than it helps. After taking about 3 minutes to explain the gallons/cubic-feet issue, there were literally zero students who had absorbed what I had said at the front of the room and yet each student understood in under 20 seconds when I spoke to them directly.

And now, you’re reading it.